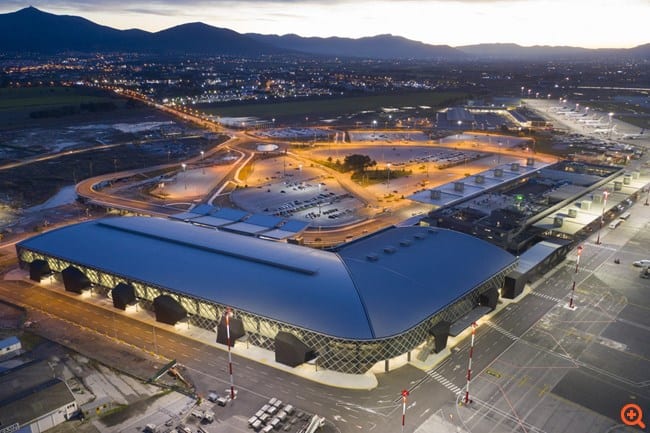 Fraport has completed a major investment which has radically upgraded Mykonos Airport, its facilities and equipment.

The images are impressive and the new look of Mykonos Airport combines modern architecture with the traditional character of the Cyclades. Inspired by the dovecotes of the Aegean, these characteristic buildings of popular Aegean architecture, the design approach “marries” the tradition of Mykonos with its modern and contemporary side. Thus the upgraded airport infrastructure is a continuation of the aesthetics and architecture of the landscape, inviting travellers and users to discover the island through its airport.

The projects implemented at the airport include the following:

– Extension on the north side of the existing building with a total surface area of 2000sqm which will house the new arrivals section of the airport.
– An extension of the existing building by 500 m2 to create more departure gates.
– Complete remodelling – renovation of the interior
– Creation of new shops and catering facilities in the departures area.
– Complete renovation of existing sanitary facilities
– Creation of two new special passenger areas
– Installation of a modern baggage handling and explosives detection system
– Redesign of the entire vehicle circulation area at the entrance to the terminal

The new airport reflects the vision of the local community, as the final result regarding its architectural design was proposed by the managing company after discussions and open dialogue with them. The total investment amounted to €25 million so that today we can talk about a modern airport with upgraded services and more options; a tourism gateway comparable to this beautiful place.

In a statement, the Mayor of Mykonos, Konstantinos Koukas, said the following:

“The airport of any international tourist destination is also its showcase. The completion of the upgrading of the new airport following the cooperation between the Greek State and FRAPORT is an important development because on the one hand it upgrades the services provided and on the other hand it is of high aesthetics. During the works, in the previous years we had a sincere and productive cooperation with FRAPORT, during which, among other things, we requested the complete replacement of the runway and the replacement of the original architectural proposal that did not fit the environment and the Cycladic architecture.

In this context, I would like to express our satisfaction with the proposal that has been implemented and is in keeping with the character of the island, both architecturally and aesthetically. The cooperation between the State, the private sector and the local authorities is the only effective and efficient way to achieve a development model that not only meets its economic objectives but is fully compatible with the culture, civilisation and sensitivities of each local community.