Upgraded, with new infrastructure and modern services that meet all safety and hygiene standards, the country’s 14 regional airports managed by Fraport Greece have already started to welcome the first passengers of the season.

As passenger traffic increases with people returning to travel after the coronavirus shock, the first image travellers have of our country, which is none other than the airport, is very different from the one before the pandemic. This is due to the €440 million investment programme implemented by Fraport Greece, which was completed in January 2021, three months ahead of the contractual obligation.

The total direct revenue over 40 years – the duration of the concession – for the Greek state, according to the relevant models run by the company, will amount to around €10 billion. Indirectly, the benefit is even greater, as international practice has shown that the more modern, more comfortable, safer and friendlier the infrastructure of a tourist country, the more attractive its destinations become. The benefits thus spread to all tourism sectors, such as hotels and accommodation in general, catering, museums and culture.

The timetables were tight. From Corfu to Rhodes airport and from Thessaloniki to Chania, the construction fever left no day to waste.

Work at the airports did not stop for a single moment, both during the summer months in the first three years, when tourist traffic set new records, and in 2020, when the coronavirus pandemic broke out.

The changes at a glance

In more detail, the airports where the upgrades were completed first were those of Zakynthos, Crete in Chania and Kavala. At Zakynthos, the renovation and reconfiguration of the terminal was implemented so that check-ins increased by 35% and security points by 150%.

At Chania airport, the terminal was completely reorganised, gates were increased by 25% and security and check-in points doubled. Similar renovation work was also carried out in Kavala where, at “Alexander the Great” where, among other things, the terminal was extended by 1,955sqm.

On the mainland, another airport that has been completely changed is that of Aktion, which was extended by 2,500sqm, remodelled and now has 14 check-in points, 7 departure gates and twice as many security points. In Samos, after the completion of the modernisation works and the extension by 1,550sqm, an increase in the number of check-in, departure gates and security points has been achieved.

Skiathos airport, is larger by 2,185sqm and fully renovated, while in Mytilene, the “Odysseas Elytis” airport, is a brand new modern and comfortable terminal of 7,135sqm. 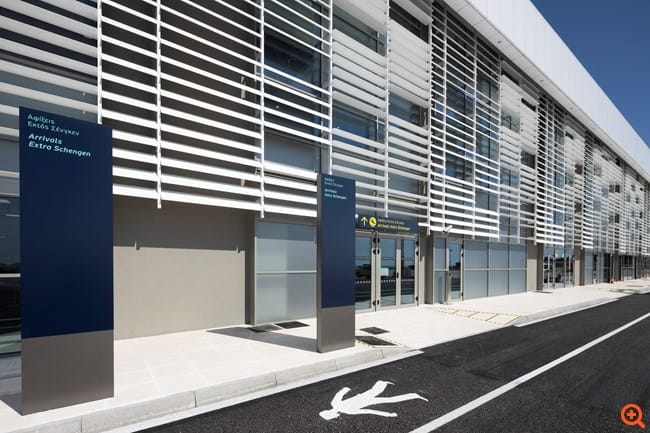 The works completed at the Anna Pollatos Airport in Kefalonia have resulted in a new terminal of 10,700sqm, with an increased check-in area of 70%, twice as many security points and twice as many departure gates.

The brand new and 50% larger terminal at Mykonos Airport, a jewel for the island that combines Cycladic architecture with modern airport infrastructure, now has more check-in and departure gates and the terminal extension has been fully utilised to facilitate passengers and airport users.

Rhodes Airport, has a completely different and upgraded image. It is a modern airport of international standards, with a reconfigured aircraft parking area and an increase in check-in points, baggage collection belts and security and control points.

The same applies to the “Ioannis Kapodistrias of Corfu, which was delivered in the second quarter of 2020. The new 10,355sqm terminal as an extension of the existing terminal accommodates 28 check-in, 8 checkpoints and 12 departure gates.

The three airports that followed are those of Kos, Santorini airport and Macedonia in Thessaloniki. In Kos, Fraport Greece, proceeded with the construction of a new terminal with a total area of 23,015 sq.m. and the construction of a new aircraft parking area and the reconfiguration of the existing one. In Santorini, the new terminal of 15,400 sqm, contributes significantly to the “take-off” of the travel experience for the most “famous” island of Greece worldwide.

The iconic Macedonia Airport of Thessaloniki

This new terminal is connected to the existing terminal by impressive air bridges. This has doubled the total area of the Macedonia terminals, which now have more facilities and options. New check-in areas, twice as many departure gates, new catering and shopping outlets make up an airport environment reminiscent of Europe’s most popular airports.